Many schools use some kind of ‘traffic lights’ or ‘ragging’ on their marksheets to indicate if a pupil is below, on or above their school target. Commonly, as well as a colour, these columns will display A, O or B for ‘Above’, ‘On’ or ‘Below’ target (or perhaps +,= or – symbols).

We’re developing a set of SIMS Discover graphs to highlight pupils who are working on, above or below their school target. We will create one for each term between Y3 Autumn and Y6 Summer term.

These graphs make interesting comparison with the graphs that show the number of pupils attaining (for example) level 4 as they help highlight progress rather than raw attainment (an issue in many schools). 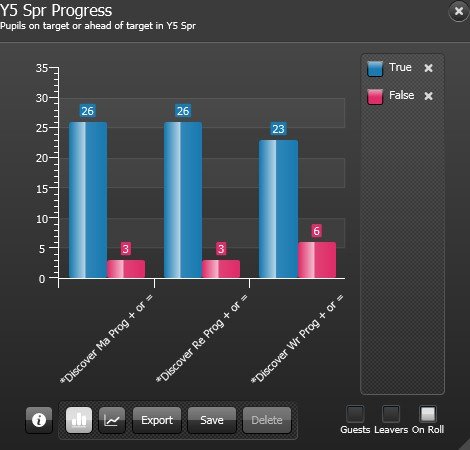 In this graph the blue columns represent the number of year 5 pupils in the spring term who have achieved their target grade (i.e. the number of pupils. The red columns represent the number of pupils who were below their target grade. The subjects on the graphs are Maths, Reading and Writing. So we know that 26 pupils attained or exceeded their Y5 Spring target in Maths. Three pupils were below target. Meanwhile 26 pupils in reading and 23 pupils in writing attained their termly targets.

2) On or Above Target Venn 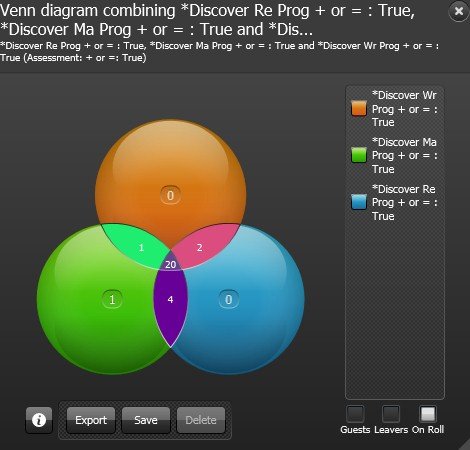 From the previous bar chart above we create this Venn diagram (simply by dragging the three blue columns onto the canvas). We can see that twenty pupils reached their target in all three subjects (the ’20’ right in the middle of the diagram). However four pupils attained their target in reading and maths, but not in writing (see the purple ‘4’). By clinking on the ‘4’ we can display the names and photographs of those four pupils. 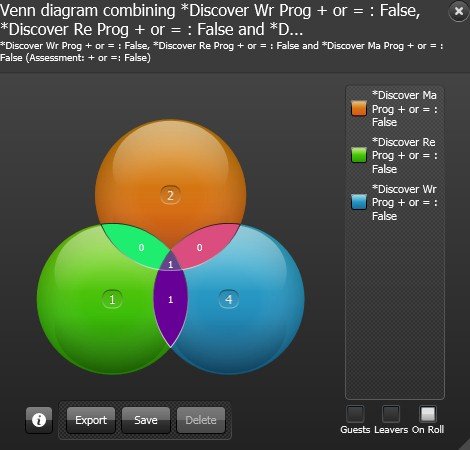