Yesterday I was at a meeting of local secondary schools with one of Capita’s consultants, Matt Sharman. Secondary schools were keen to discuss Capita’s approach to ‘assessment without levels’ and Capita are always keen to talk to schools. The focus of the meeting was an update on the new KS3 Programme of Study Marksheets for Secondary Schools.

There was welcome confirmation that the KS3 version of the programme of study marksheets will be released a couple of weeks after the main Summer release – so this should mean that data managers will have the opportunity to familiarise themselves with the new system and get the marksheets set up before the start of the new academic year. 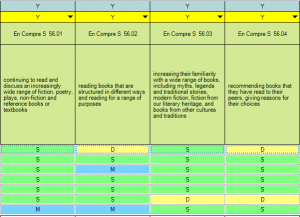 Close up of the English Comprehension marksheet

If you’ve not seen the new programme of study marksheets I’ve created an online course to demonstrate the main features and a shorter video demo if you just need the basics.

The issues raised by the group in the discussion were interesting. The issues were also representative of the comments I hear when I visit other secondary (and primary) schools, so I want to share them here: 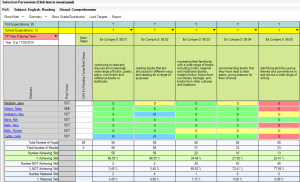 Example of the new marksheets available from Spring 2015

On balance the feedback was positive, and there was an acknowledgement that Capita were moving the discussion forward. Ultimately, secondary schools who want to move away from levels and who want to adopt a 4-grade structure along the lines of emerging-developing-secure-mastered will want to investigate the new system a soon as it becomes available. Many will want to run a pilot with a selection of subjects in the Autumn term. Meanwhile Capita will continue to develop the system, increasing its flexibility as they listen to schools. Even if a minority of secondaries adopt the new approach, with SIMS in 22,000 schools across England and Wales, that’s still a huge number of schools.