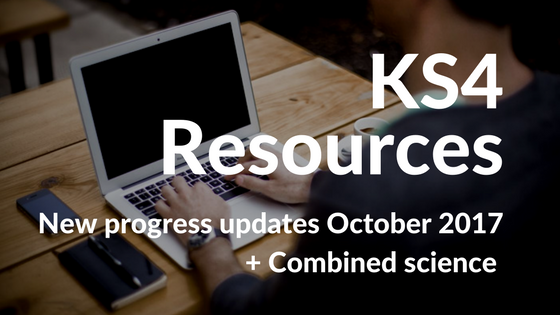 Capita have just released a new update to their KS4 Resources. If you use the resources you will want to download this update asap. The update includes the latest progress estimates, plus an update to allow combined science to recorded. New scatter graphs are also included.

Note that if you want to use combined science aspect included in the release, you will have to wait till you get the autumn term SIMS update (in the next few weeks for most schools) before it gets included in the aspect mapping routine.

I’m sure most of you are already following the KS4 analysis resources newsfeed, but here’s a copy of Capita’s statement in full:

Following the release of some of the 2017 progress estimates by the DfE we have updated some of the KS4 resources.  These can be found here along with the latest versions of all of the resources.  Please read the explanatory notes carefully before using them.

a. These have been updated to use the national unvalidated estimates based on the KS4 results for June 2017.  Please note that, frustratingly, the DfE has again only published new estimates for the Attainment 8, English, Maths, Ebacc and Open elements and not the subject pillars of Science, Humanities and Languages, so the latter are still using the the latest figures we have, i.e. the 2016 validated figures, not even the shadow figures.  To use these to recalculate your 2017 exam results so as to compare the figures in the data checking exercise, please download the new versions which will overwrite the TP Year 10 Autumn versions of the templates.  The newly imported 2017 version will then need to be cloned for the TP June 2017 Exams result set, and then a year 11 marksheet attached and recalculated, having changed the group membership date and refreshed first.

b. The 2018, 19, and 20 templates contain some additional aspects, in particular the Act:GCSE Combined Sc (9-1) aspect.  This could now be used instead of the aspect which has been previously used for the new GCSE science exam, Act:GCSE Double Sc (9-1).  Schools will only be able to use the mapping tool to map to this new aspect if and when they take the SIMS Autumn release v1.78.  The suggestion would be that in the mapping tool the double science aspect link is removed and the Combined Science link added.  There will also be the need to map the new grade set.  If schools wish to use this new aspect for historical data also, please ensure that the results in the old aspect have been deleted to avoid double counting.  If schools would prefer to continue to use the old Double aspect, then that is not a problem, as both will remain on the templates.  Please just ensure that data is only in one of them for any given result set.

The national data tabs of these versions have been updated with the new estimates.  The instructions as to how to use them are given below in the posting of 30th June.

Note: We have not updated the RAISE dashboard report with new national figures at this point.  This will be published at a later date, but the current report will of course run in conjunction with the new templates and the figures are just as valid to compare the performance of key groups within the school.